Saul: I am an amateur environmental artist and a veteran of the U.S. Army. I served in the U.S. Army Infantry for six years with two deployments to Afghanistan and Iraq. After I went to college to learn to become a game designer. My primary passion will always be video games and their creation. I've always enjoyed the entertainment and immersion they bring and having learned how to make them, even in a small part is very rewarding.

John: I am also former military with deployments in Bosnia, Kosovo and Iraq. Currently working on my IT qualifications. Just like for many modders my passion is within games, particularly flight sims. That's why probably I specialize in developing fixed-wing assets for games.

Saul: Our addon, the F/A­-18X Black Wasp, is a twin­-engine carrier­-based multi­role fighter aircraft variant based on the Boeing F/A-­18E Advanced Super Hornet. The Wasp has many features, most notable being the integrated service menu, which allows simple change of aircraft munitions in-game, allowing for over 150+ possible combinations of bombs and missiles. 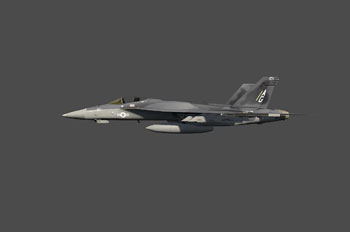 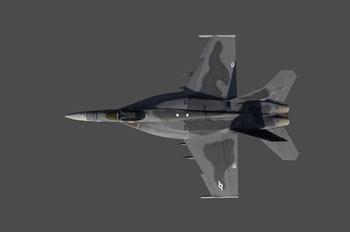 Where did the idea come from? How did it start, and what did you use as inspiration?

Saul: The idea of the Black Wasp originated with a plan on upgrading our existing F/A-18E and F Super Hornet mod. The former aircraft were originally created for Arma 2 and then ported over to Arma 3 with some upgrades. John and I then decided to upgrade from the E/F Super Hornets to the Black Wasp which gave us the chance to add some new features like the enclosed weapons pods and conformal fuel tanks.

Can you tell us a bit more about the development process?

Saul: The overall development process for the Black Wasp was pretty much the same pipeline used by most game designers. We started with loads of references and created a base model. Since we already had the F/A-18E we stripped the old model down and used it as the base reference for new model. From there I created a high poly model and then a low poly model from the base. Then I UV’ed the low poly and used the high poly model to bake textures, specifically the normal maps and ambient occlusion. Then it was on to texturing and then a wrap up on the model end. Once we had the base though, and to make the process easier on the two of us, I sent the base to John to work on the flight model and all of the features. Once we had the final low poly he was able to finalize the flight model, the features, and create all of the animations. Overall the mod took about six months from start to finish.

Saul: The one part of the mod I am most proud of is the integrated service menu. Sure we have a good looking aircraft that is fun to fly but the SM is what really makes this aircraft for me because it greatly enhances the aircraft’s capabilities. With normal Arma 3 aircraft you are limited to one loadout for the plane and you would need a completely different aircraft in the editor or script to change that. With the Wasp, all it takes is a few mouse clicks near a hanger and you can perform just about any mission the plane was designed for. 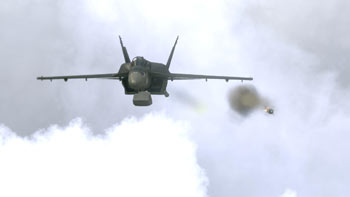 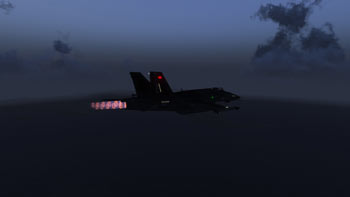 John: During the development of "ejection system" for our aircrafts we encountered an interesting problem - ragdoll characters, once colliding with other objects in motion, got killed. In our case it was part of the ejection sequence, where co-pilots ejecting from the F/A18F, hit the canopy and got killed. We called that a "Goose effect".... as you can test the ejection is working fine and safe for the players :D